By clicking the link(s) above, you will be taken to an external website that is independently operated and not managed by GSK. GSK assumes no responsibility for the content on the website. If you do not wish to leave this website, do not click on the links above. 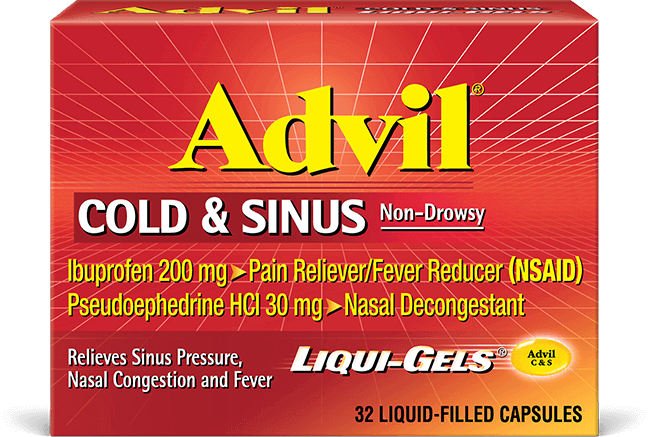 Many people attribute the stuffiness associated with the cold or the flu to an increase in mucus which blocks their airways. While it is true that increased mucus is a symptom of the common cold, it is not always what causes you to feel so stuffed up. Instead, the true source of nasal and sinus congestion is often caused by inflammation of the tissues throughout the nose and face. When the body identifies a virus it considers a threat, it springs to defense in various ways, one of which is by causing the airways within the nose and sinuses to swell and become inflamed.

Advil Cold & Sinus is a combination of pseudoephedrine (a powerful decongestant) and ibuprofen (an effective pain reliever). The two work together to reduce nasal and sinus congestion caused by inflammation and lessen the pain associated with the common cold or the flu.

The best way to relieve congestion is to treat the inflammation that causes it. Advil Cold & Sinus addresses this problem with an effective decongestant, called pseudoephedrine. Pseudoephedrine works by releasing norepinephrine, a form of adrenaline, which affects the tiny muscles lining the walls of blood vessels, causing them to constrict or close. This process serves to re-open vital airways and allows the cold-sufferer to breathe easier.

Advil Cold & Sinus can help alleviate your discomfort from your swollen nose and sinuses making you feel less pain.

When to Use Advil Cold & Sinus

Nasal and sinus congestion are symptoms of the common cold or flu. The decongestant in Advil Cold & Sinus relieves congestion to help relieve your stuffy nose and ibuprofen relieves pain. Advil Cold & Sinus is a safe, non-prescription drug that can be used by people 12 years and older. It’s available behind the pharmacy counter at your local drugstore or grocery store. As with all medications, make sure to read all directions to ensure the proper usage and if you have any concerns, consult your physician.